The MuhammadAliCenter opened in Louisville, Kentucky in November 2005. The Center is an international cultural and educational institution developed to preserve and to continue sharing Ali's legacy by inspiring and guiding others to be the greatest that they can be.

Attending the opening celebrations were some of the world's great personalities including former President Bill Clinton, actors Brad Pitt, Angelina Jolie and Jim Carrey and heavyweight boxing champions Evander Holyfield and Lennox Lewis. And amongst the thousands that travelled to Ali's home city to honour one of the most recognized people on the planet was eight year old Auckland boy Mitchell Clay Butler.

Larger than Life tells the story of Mitchell's pilgrimage to Louisville, the people he met and the places he saw. The likes of President Clinton, Jim Carrey and Evander Holyfield tell us why they think Ali is the greatest and we're there with Mitchell as he takes centre stage at the opening ceremony in front of 4,000 world leaders, dignitaries and Ali fans and delivered the speech that made New Zealand proud. 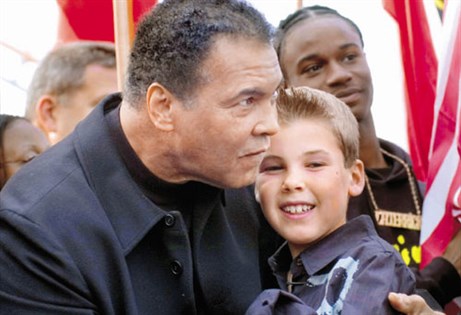